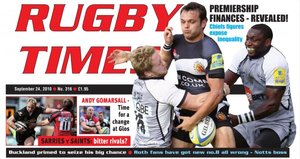 This weeks edition of the weekly rugby newsletter featred Marlow and an interview with Chairman Paul Kuiken. Article provided in the link.
MARLOW RFC - "SPOTLIGHT'
"RUGBY "TIMES' BY GREG TESSER

It was cuttingly cold, with the frost as sharp as flint. For several weeks, the lands around Bisham Abbey had been lying under a monotony of snow which, like some magical enchanter, transformed even the most familiar landmarks into strange and silenced shapes. The scene is the Chequers Hotel. The year is 1947, and Marlow RFC was about to be born.

It was February 3rd, and Buckinghamshire, like all of Britain was suffering under the weight of post-war austerity, with rationing, power-cuts and all possible deprivations turning the country from monochrome grey into darker shades.

Yet all was positive at the Chequers, as the following resolutions were passed: A provisional subscription of 5 shillings (25p) to be paid by each member, an account be opened at the National Provincial Bank, and that some matches be arranged, the first of these against Old Wycombensians.

However, to say that a rugby club in the town was founded in 1947 is only partially true, as back in February 1913 a Marlow XV triumphed 13-0 over High Wycombe. To quote Dr G. Berkeley-Willis, who actually played in the contest, "At the end of 1912 one or two of us, who had been at schools which played rugger, thought it might be amusing to get together a team to show Marlow - which was then prominent at soccer - what "the handling game' was like.

" This was the only match played - other interests intervened - and in the following year, of course, came the Great War."

Fast-forwarding again to the 1940s, in 1948 the club became affiliated to the RFU. During the Fifties, the club expanded and became an integral part of the local sporting scene.

In 1963 the club moved to its present venue at Riverwoods, and some innovative schemes saw enough cash raised for the building of a clubhouse.

These days, Marlow remain a fervent advocate of the amateur ethic, and the man at the helm of the South West 1 East club, their youngest-ever chairman, Paul Kuiken, is convinced this will always be the case.

"Our main aspiration is that our senior players enjoy playing the game that bit more," he told me. "In other words, to get the sort of enjoyment that used to be the case when the game was wholly amateur. But obviously we'll be trying to get to the highest level we can."

Paul has been chairman for just three months, but his involvement with the club goes back a decade.

"I played on the wing for our first XV, and these days still turn out for the vets as a utility back," he said.

"Nearly all our first XV squad has come through the mini and junior sections, which is, in my view, the key to our success."

On the playing side, they have a new skipper in the shape of second row Ewan Jones, who has replaced Dan Gillespie, whose career has been cut short by injury. It's a real family thing with the Gillespies, as his mother Linda is in charge of "managing all events".

The coaching gurus are director of rugby, Frenchman Laurent Morlet, and head coach Tongan Fe'ao Vunilopa, who joined the club in the summer.

"Our excellent level of coaching gives the players the right of sort of experience to progress," explained Paul. "I am also a great advocate of tag rugby, and our minis and juniors have been very successful. In fact we've had a great influx into our under-7s.

"One of the youngsters to have graduated to the highest level was Matt Dawson, who represented our under-18s."

Despite the recent comment of Somerset County Cricket Club chief executive Richard Gould that "the recession is over", Kuiken remains in the real world.

"All clubs, including us, have had to face-up to the recession," he admitted. "The plan is to improve our facilities - the England team used us as their training base in the early Nineties - and this will generate the revenue we need."

In an era of so many club officials chasing "impossible dreams", how refreshing to hear from one who is actually in touch with reality.